He said: “I am using the term Scheduled Tribe as it is constitutionally valid. However, the terms tribe, indigenous and primitive can be used interchangeably. During the colonial period, a lot of ethnographies on tribes were produced which cannot be separated from the colonial interests and concerns. Some of the routine justifications are:  promoting the cause of the growing field of anthropology and recording variations and the rapidly vanishing cultures.  I strongly believe that the anthropological literature produced during the colonial period needs to be reread by native scholars with subaltern consciousness. I would now like to throw light on Isolationist and interdependent models. The popular perspective is that the tribes have been isolated people. The detailed studies of the scholars have suggested that the food collectors and the food producers have been interdependent and resource managers”.

Professor Deepak Kumar Behera, Vice-Chancellor, KISS-DU introduced the theme of the international webinar. He facilitated the entire proceedings of the webinar and said: “Today’s date will be remembered in golden letters in history as today we had the first meeting of the newly constituted Tribal Advisory Council (TAC), the brainchild of Professor Achyuta Samanta, Founder, KIIT & KISS.”

Dr Prashanta Kumar Routray, Registrar, KISS-DU presented a brief profile of the university and shared the key aspects of the first meeting of the Tribal Advisory Council. He said: “I would like to share with eminent anthropologists that the TAC has recommended implementation of the concept of Professor of Practice, preparation of an exclusive Tribal Calendar of Festivals, promoting games, and sports, floating diploma and certificate courses on Tribal Life Skill Education, opening School of Performing Art, a course on Food Science, establishing two new Research Chairs on Birsa Munda and Laxman Naik”.

Professor S. Gregory, Member Secretary, UIAF delivered the formal vote of thanks to all present. 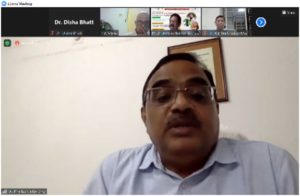 Stay tuned to receive the news & updates of  WAC2023